The Endangered Apples of New England 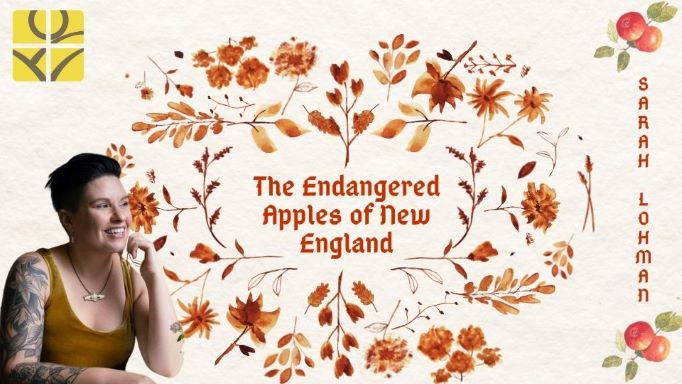 Most Americans would be surprised to learn that a common New England crop, apples, have been called the country’s “most endangered food.” Currently, 86% of apple varieties grown in the US have vanished, and four out of five are on the brink of extinction. Many of these apple varieties are not “dessert apples” like Red Delicious, but traditional cider apples. During Prohibition, apple trees were cut down by supporters of the Temperance movement as a showy conquest over America’s alcoholic heritage. Often bumpy, brown, and tannic these apples didn’t have the appeal to succeed in a modern grocery store.
But thanks to the hard cider revival, rare apples are being saved. In this talk, we'll explore the historical characters that brought good cider to America and the contemporary cider makers who hope to preserve these apples. I'll also share my travels across the country on the hunt for rare apples, including a once famous New Jersey apple that was considered extinct until its 2018 rediscovery in an abandoned 19th century orchard.
About the Presenter:

Sarah Lohman is originally from Hinckley, Ohio where she began working in a museum at the age of 16, cooking historical food over a wood-burning stove. She graduated with a BFA from the Cleveland Institute of Art in 2005. For her undergraduate thesis, she opened a temporary restaurant/installation that reinterpreted food of the Colonial era for a modern audience.Lohman moved to New York City in 2006 and worked as Video Producer for New York magazine’s food blog, Grub Street. She chronicled her personal explorations in culinary history on her blog, Four Pounds Flour, from 2008-2018. Lohman’s first book, Eight Flavors: The Untold Story of American Cuisine, was released by Simon & Schuster in December 2016.

Over her career, Lohman’s work has been featured in The New York Times, The Wall Street Journal, The Washington Post, as well as on All Things Considered, CNN, Gimlet Media, and NHK Japan. She appeared in two seasons of The Cooking Channel’s Food: Fact or Fiction. Formerly the Curator of Food Programming at the Lower East Side Tenement Museum, she currently works with institutions around the country to create public programs focused on food. She has presented at The New York Public Library, the Museum of Science (Boston) and the Smithsonian Museum of American History to name a few. Her current book project, Endangered Eating: Exploring America’s Vanishing Cuisine will be released by W.W. Norton & Co. in 2021.

You must log in to register for this event.
Oops! - There was a problem in authenticating your card: